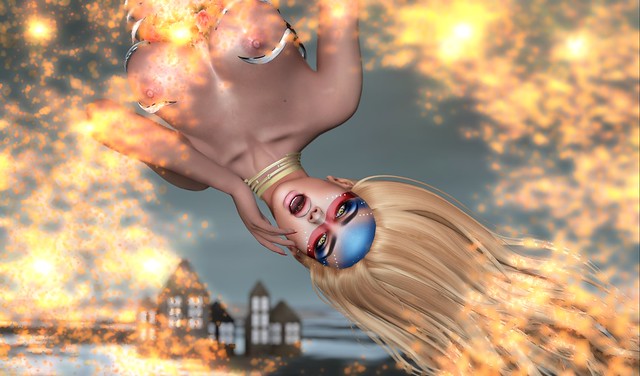 Tableau Vivant \\ Falling hair – Downfall … made by M4ri1yn Magic.
I am wearing this “falling up” hair in a tone from the Reds pack. The Falling hair will be available as a gacha item at the September 2018 round of The Arcade and the Tableau Vivant gacha will have four different styles – the others being Evenfall, Shortfall and Windfall. NEW.

.:EC:. Damned Incisive Skeleton (Maitreya) … made by teslinne Quan.
This was purchased at The Secret Affair event in October 2017.

gold dust (worn on Spine) … made by Venus Adored.

The sole prop that I have used is:
/ frag.ment’s / Liten Homes … made by Marouanne Resident. Purchased at the latest round of SaNaRae, which is open from August 26th until September 17th. NEW.
SaNaRae