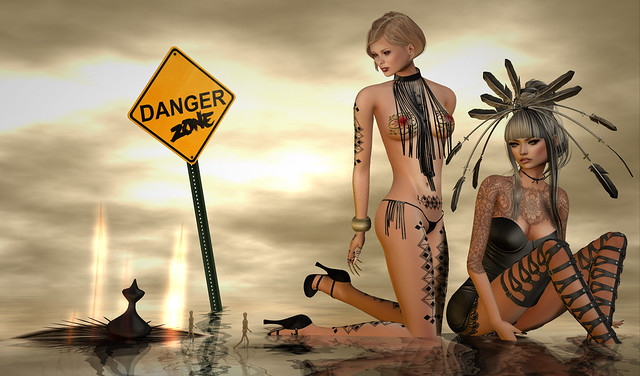 fri. – Rowena.Heels (Coal) – Maitreya … made by Darling Monday. Available now at the current fifth anniversary round of Collabor88, which is open from August 8th until September 6th. NEW.
Collabor88

{Letituier} Trama Hat – Black … made by Nayomi Gartner. This was rezzed by me to form part of the crashed “alien spaceship”. 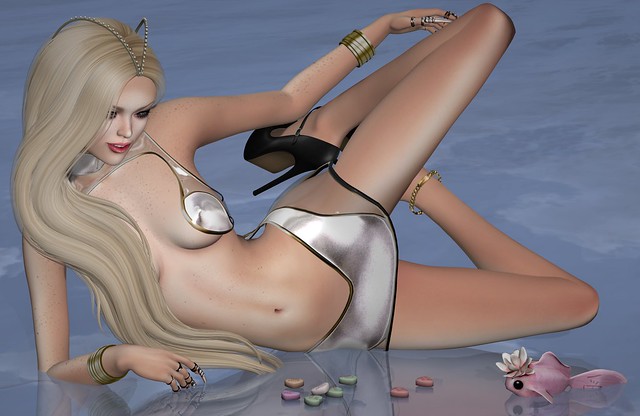 Cos even our poisson friends deserve a little attention on Valentine’s Day!! 😀

As for fashion style, Alles is wearing the following:

Elysium – Elvira head crown – white gold … made by Aleida Rhode. Purchased at the current round of We Love Role-Play, which is open from February 4th through until February 29th. NEW.
We Love Role-Play

[Entwined] Aurora – Light Blondes … made by VivienMarli Resident. This beautiful hair is available now at the current round of We Love Role-Play, which is open from February 4th through until February 29th. NEW.
We Love Role-Play

StrawberrySingh.com – Pretty Shape XXS … made by Strawberry Singh. The shape has been modified by me – as I am taller, the hands are now set at 10, my shoulders are set at 54 and hip width is now 58. Purchased on MarketPlace in August 2014.

r2 A/D/E shou[silver]Maiteya … made by rei2 Aya. Purchased at the just completed Holographic round of Collabor88. But don’t despair, as the shou outfit should be available in the R2 Fashion store very soon. NEW.
R2 fashion at Love Soul

fri. – Macey.Platforms (Coal) – Maitreya … made by Darling Monday. Available now at the current round of Uber, which is open until February 23rd. NEW.
Uber

The pose that I have used is DM – F*** yoga … made by Del May.
Del May Mainstore 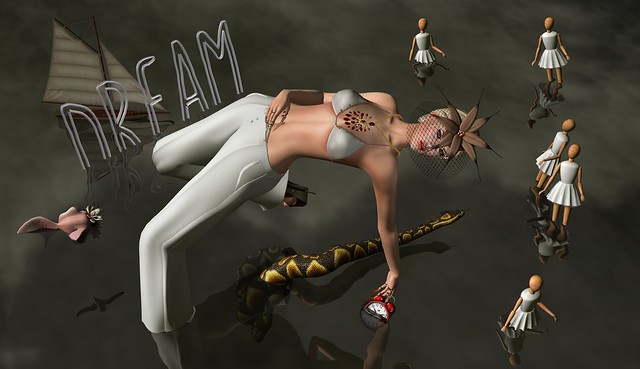 Well maybe I’m not quite alone in this dream but I was listening to a song with that very title when I was making this picture!! 😀

As for my worn details, Alles is decked out in the following:

Elysium – Greta flower hat – creme prulee … made by Aleida Rhode. Purchased at the just finished round of The Dressing Room Fusion, which was open from June 7th to June 18th. NEW.

[Entwined] Aspen hair (light blondes HUD) … made by VivienMarli Resident. Purchased at the current round of IDK, which began on June 16th and finishes on July 10th. NEW.

Zaara : Morjim bikini top (maitreya) … made by Zaara Kohime.
This was gifted to me by a dear friend who was lucky enough to win two copies on the Zaara gacha machine at the current round of The Arcade Gacha. NEW.

GizzA – Vicky Trousers [White] Size XXS … made by Giz Seorn. The Vicky Tank Blouse (not worn) and Trousers will be available at the June round of Shiny Shabby which opens on June 20th. NEW.
Shiny Shabby

Glamistry : ERANTHIS Heels – maitreya … made by Glamistry Resident. More about them in a future blog post.

AF Ralph’s Boat … made by Apple Fall (aka warehousefifteendesigns Resident). Purchased on MarketPlace in March 2015 for 125 lindens. In this picture I have used the boat at a “reduced size”.

[Con.] Bluebird Cuddle Van (Sign Only) … made by ValiantCo Resident. The DREAM sign is part of the Bluebird Cuddle Van but thanks to that original prop being COPY, I was able to make a copy which I then dismantled via the Unlink function in Edit. And voila, just a sign was left. Purchased at the March 2015 round of Collabor88.

Serpent5 – Diesel Works … made by Rogan Diesel. Purchased in August 2013. The serpents are rezzable with built-in poses (just click and sit on them), or you can just use them as a prop, which is what I have done here.

09.erratic / lsm – alarm clock – red … made by Erratic Rain. A gacha item from the current round of The Arcade Gacha, I purchased it at The Pea’s Arcade Yardsale. NEW.

[*Art Dummy!] once. ( tabletop version decorative dummy) … made by Gala Charron. Purchased in June 2012 at Fairy Tales. And yes, I have used five of them in this picture cos they are COPY!

The pose that I used is CORPUS – Lounge Series 007 … made by Diconay Boa. This was purchased as part of the Lounge Series set at the May 2015 round of Events @ 1st. NEW.