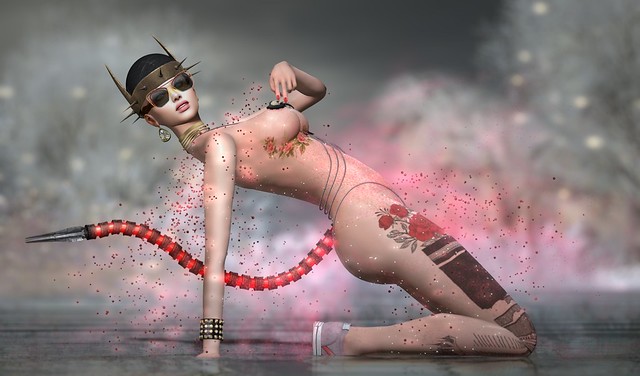 And some flesh colours as well, of course!! 😀

As for her worn details, this is how Alles is kitted out today.

AZOURY – Abimes Helmet Gold [Copy with resize] … made by Aniki Seetan.
The Abimes Helmet is available now at the latest round of Limit8, which is open from September 18th through until October 13th. NEW.
Limit8

-Narcisse- Jayla Pearls Top – ML FATPACK … made by Narcisse Resident.
The Jayla Top along with the Jayla Panties that I’m also wearing, are both available now at the current round of the Kink(Y) Event which is open until September 19th. NEW.
Kink(Y) Event

RKKN. Lara’s Metal Bangle … made by Keon Xenga. Purchased at the most recent round of Shiny Shabby which finished on September 15th, Lara’s Bangle and other glittery kit are now available at the RKKN store inworld. NEW.
Nutmeg RKKN RK Poses

-Narcisse- Jayla Pearl Panties – ML FATPACK … made by Narcisse Resident.
The Jayla Panties along with the Jayla Top that I’m also wearing, are both available now at the current round of the Kink(Y) Event which is open until September 19th. NEW.
Kink(Y) Event

ED. Sneakers Maitreya Cipria … made by Thetra Blackheart. Purchased on September 19th as a Hello Tuesday item on the No Comment/Cosmopolitan SIM.
E-Clipse Design @ No Comment