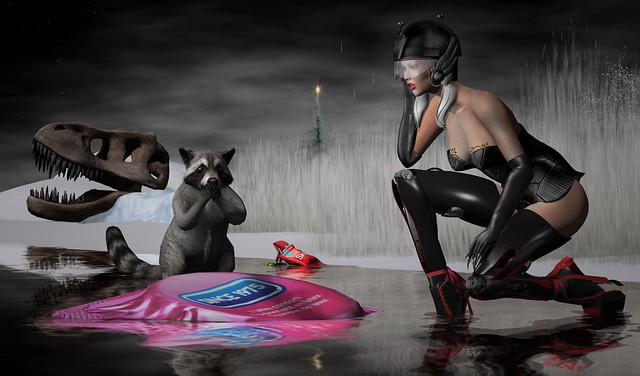 Dear Santa, I promise that I will return this “thing” unopened!! 😀

As for my fashion style, this is what Alles is wearing.

CUREMORE / Selenopolis / Roboria Helmet (Onyx) … made by PsyQueen Resident. This includes the hair which can be tinted in seven different colours via an included HUD. The Roboria Helmet is part of a Selenopolis set that that was available at the May 2017 round of The Fantasy Gacha Carnival.

*YS&YS* Pris Eyes applier for Lelutka Bento Head … made by Monyka Benelli. Purchased at the previous round of the We Love Role-Play event, which finished on November 30th. NEW.

Persefona Doll Shape … made by Persefona Resident. I have tweaked this shape by making my shoulders wider and my head bigger. Purchased at the current round of the Cosmopolitan Event, which is open from December 4th to December 16th. NEW.
Cosmopolitan Event

Mutresse-Sneaky-Naughty Elf … made by Eeky Cioc.
This is one of the Naughty Elf set that each are available now as gacha prizes for Mutresse at the December 2017 round of The Arcade Gacha event. NEW.
The Arcade Gacha 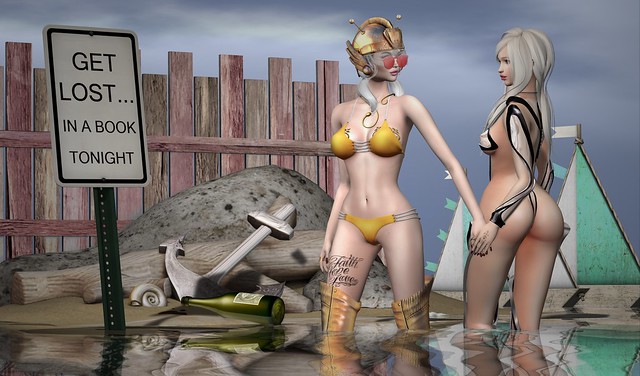 (Yummy) Rimless Shades – All Colors … made by Polyester Partridge. Purchased at the current round of Collabor88, which is open from May 8th until June 6th. NEW.
Collabor88

AMECHAM – on the right – is wearing the following:

Astralia – Calm beach scene backdrop … made by Astralia Resident.
This was available as a gacha prize/purchase at the last round of the No21 event, which unfortunately finished on May 12th. NEW.

Paris – Wine bottle spilled … made by Ria Bazar. This is part of a full Paris set that Alles purchased at the Lost & Found event in October 2015. Now available instore.
~BAZAR~Paris-Full set @ L A Dreams SIM