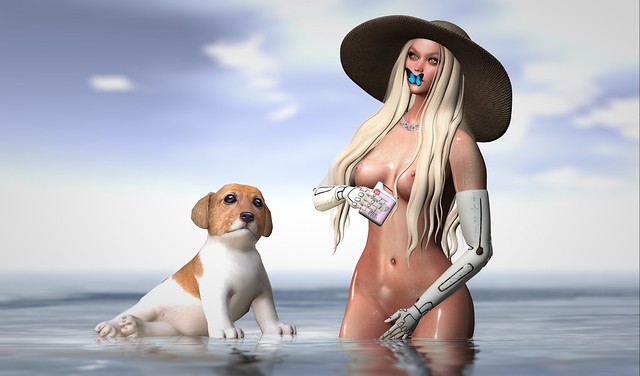 MINA Hair – Tuula … made by Mina Nakamura. Tuula is a long wavy hairstyle with a sun hat that comes in six different textures – and I’m wearing it in a tone from the Blonds pack. Tuula will be available at the next round of FaMESHed, which begins on March 1st. NEW.

-Narcisse- Xiola Metal Gem Collar – New Gold … made by Narcisse Resident.
This was purchased as part of a FatPack at the most recent round of The Liaison Collaborative, which finished on February 26th. NEW.

The sole prop that I have used is Mutresse-Sitting2-Chubby Puppies … made by Eeky Cioc. The adorable Chubby Puppies are the Mutresse offering at the next round of The Arcade Gacha, which begins on March 1st. NEW.

The pose I have used is Amitie – Party – 01 … made by BELEN Ackland. Slightly modified via Animare HUD.