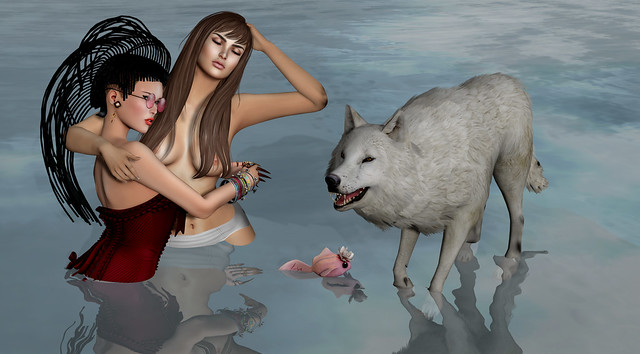 The June round of We Love Role-Play kicked off just a day or so ago and Shaleene Kenin from Pure Poison has made available this stunning new headpiece which definitely appeals to the quirky girl in me!! 😀

So I teamed up with my friend Boudicca to make a picture in the Sarawak SIM and hoped that between my head armour and our tight hug (and the fact that Boudicca had her eyes shut as well) that the snarling white wolf might just ignore us as she went strolling by in search of a meal.

And these are our worn details. ALLES – on the left – is wearing the following:

Pure Poison – Mohawk Head Armor -Black – Size S … made by Shaleene Kenin. The head armour is available in two colours (black and brown) and in four different sizes, including a bigger one for male avatars. Available now at the current round of We Love Role-Play, which finishes on June 30th. NEW.
We ❤ Role-Play!

Maitreya Mesh Body Lara – Shape 4 … made by Onyx LeShelle. (I modified the shape so that my Butt Size was 17 and therefore the underwear fitted my derrière to perfection!)

BOUDICCA – on the right – is wearing the following:

BGC White Wolf Snarling … made by Krikket Blackheart.
The white wolf is available on Second Life MarketPlace at the Better Gnomes and Cauldrons store. https://marketplace.secondlife.com/stores/57797

The pose that we used is !bang – full support … made by Luna Jubilee. However this has been modified a bit to fit our two avatars. 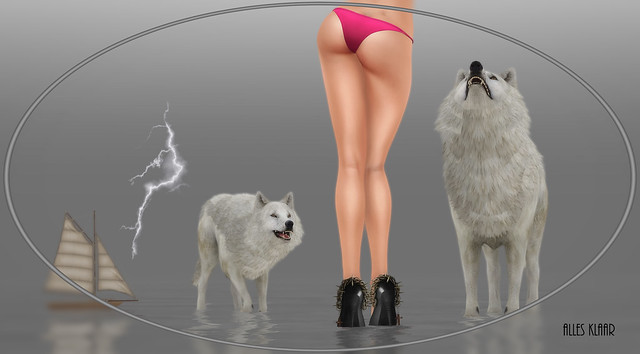 Or have the dogs come to me?

AZOURY – Innamoramento high-heeled – (Maitreya) – Dark … made by Aniki Seetan. Available now at the Dark Style Fair 2 event which is open from May 1st through until May 31st. NEW.

The pose that I used is oOo creature_five … made by Olaenka Chesnokov. Purchased in April 2011.