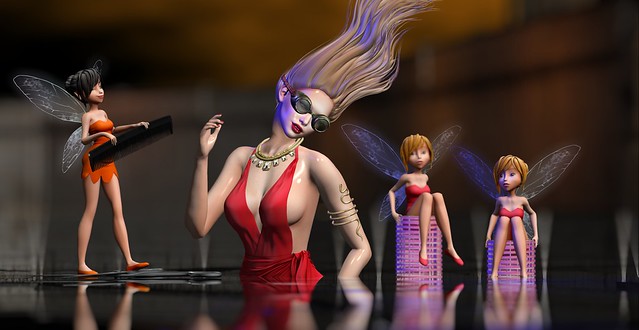 Being the tallest person in this scene, you get to read all about my worn details first.

Belle Epoque { Megan } Red (Maitreya) … made by Janire Coba. This was purchased as a discount item via The Saturday Sale for 75 lindens on March 6th.
Belle Epoque @ Wild Willows

+ Open Mouth animation + {egosumaii} … made by DevilAii Resident.
This is part of a tongue and mouth combo that was originally purchased at the Baroqued Orientilika event in March 2019. But you can now find if downstairs at the Aii & Ego Main Store in Mai Tai.
Aii & Ego Main Store, Sphere of Nuvaria

Belle Epoque – F**K U 2020 – White (Maitreya) … made by Janire Coba.
This is a Belle Epoque group gift – it costs 10 lindens to join – which you can pick up right now at the Belle Epoque mainstore. NEW.
Belle Epoque @ Wild Willows 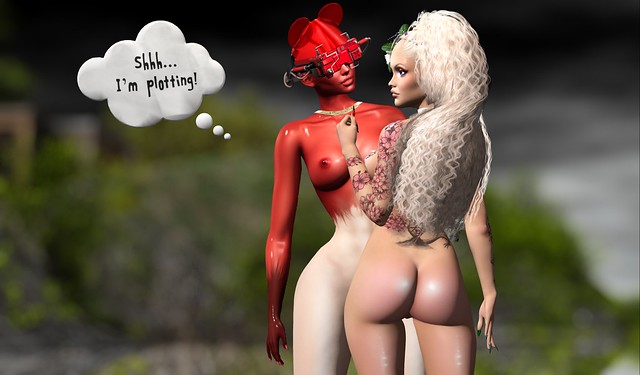 OK – I just made this blog title up on the spot but I do think it’s rather cool!! 😀

RAYNA – on the right – is wearing the following:

Belle Epoque { Elisabeth Headpiece } … made by Janire Coba.
This was a free gift at the Fallen Gods Inc. Decennial Market in October 2017.

The sole prop that I used is [ free bird ] Group Thought Bubble – Shhh…Plotting … made by Cortez Brandriss. 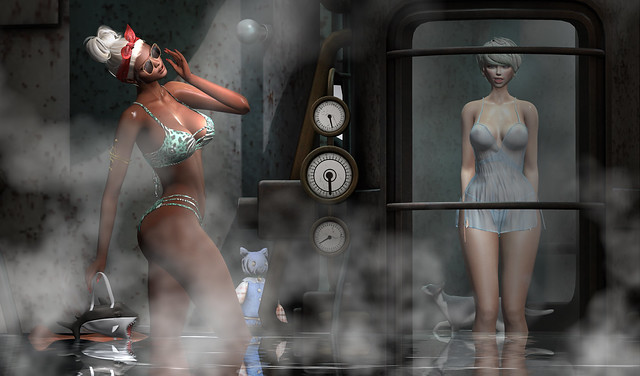 Why this title? Cos I didn’t want it to be “Driving Miss Daisy”, of course!! 😀

Anyway, without further ado, here are our worn details and more.

DOUX – Luxy Hairstyle [UNRIGGED] … made by Dam1710 Resident.
I am wearing this cute updo with a headscarf in a tone from the Blondes pack. Purchased at the Good Vibes Fair, which finished its recent run on June 29th. NEW.

CLAU – on the right (in the CryoPod) – is wearing the following: 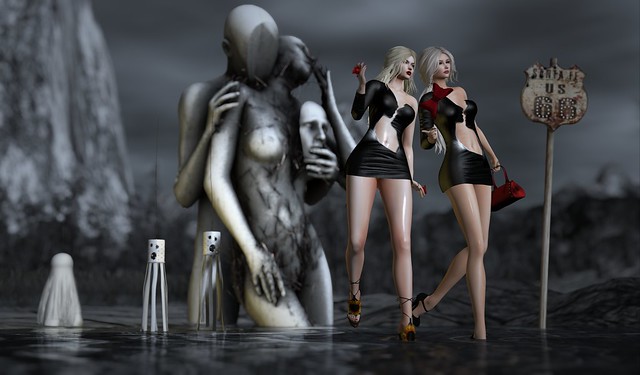 And hopefully we will get there one day!! 😀

But first, here are our worn details.

MINA Hair – Lotus … made by Mina Nakamura. I am wearing this centre-parted hair in a tone from the Blonds pack. Available now at

Fellini Couture-Kiss me gown for Maitreya … made by joy Fellini. To be quite truthful, what I am wearing is just the “dress section” of this distinctive gown as there is an add-on skirt that I am not wearing. The Kiss Me outfit is available now at the NEO-Japan event, which is open from March 31st through until April 22nd. NEW.
NEO-Japan

Pure Poison – Sunflower Platforms – Maitreya … made by Shaleene Kenin. Available now at the current round of Collabor88, which is open from April 8th until May 6th. NEW.
Collabor88

ANNA – on the right – is wearing the following:

GOOSE – Tin can ghost x 2 … made by tyrek Resident.

Scoprimi negli altri by Mistero Hifeng … made by Mistero Hifeng. I made this “statuesque” prop much bigger than its original size. Purchased at the current round of Shiny Shabby, which is open from March 20th until April 15th. NEW.
Shiny Shabby – Cammino e Vivo Capovolto 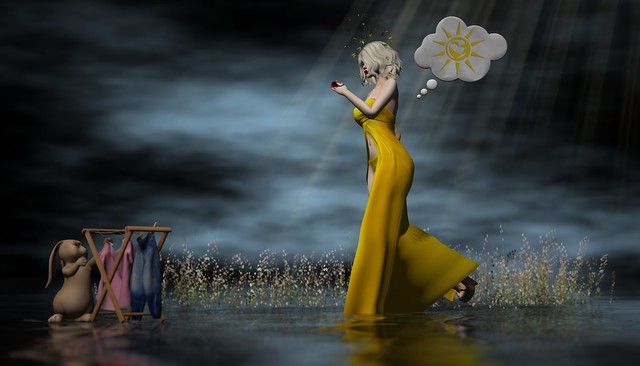 Despite feeling sick in Real Life, Alles has wanted to pretty up for days – so here she is all dressed in yellow and with butterflies in her hair!! 😀

And this is how I am kitted out.

MINA Hair – Maria Unrigged V01 … made by Mina Nakamura.
I am wearing this hair in a tone from the Blonds pack. This is available now at the Blush event, which is open from March 28th through until April 25th. NEW.
Blush 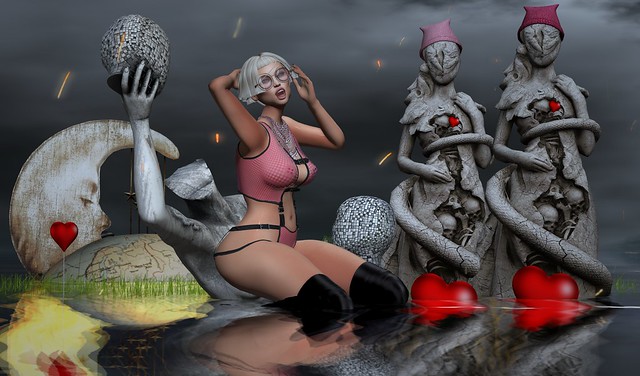 So have you guessed where the sixth heart is by now?

As for her worn details, the lovely Bewitched is decked out in the following:

.Shi : Ethereal . LBlonde hair … made by Joy Laperriere. This was first available at the May/June 2016 round of Uber but you can find it instore now.
.Shi Flagship

UC_Vixen_Bikini_white_Maitreya … made by unitedcolorsteam Resident.
Available now in thirteen different colours at the Fetish Fair 2017, which is open until February 17th. So get there quick to grab this swimsuit. NEW.
Fetish Fair 2017

Belle Epoque { Out Of This World } Boots Black … made by Janire Coba.

{vespertine} painted globe / love … made by Amelie Knelstrom. This is a copy/modify object and I made it much, much larger than the original size.

Meva Heart Stand … made by Mea Carnell. This copy/modify object is one part of a Meva group gift that is available inworld now at the Meva mainstore. NEW.
Meva Valentines Day Gift

Meva Heart x 2 … made by Mea Carnell. These copy/modify objects are part of a Meva group gift that is available inworld now at the Meva mainstore. NEW.
Meva Valentines Day Gift

And lastly, the pose that Bewitched used is Bauhaus Movement – Liquid Hater 37 … made by LouLou Teichmann. Purchased as part of a Liquid Hater pose set at the January 2017 round of The Liaison Collaborative. NEW.