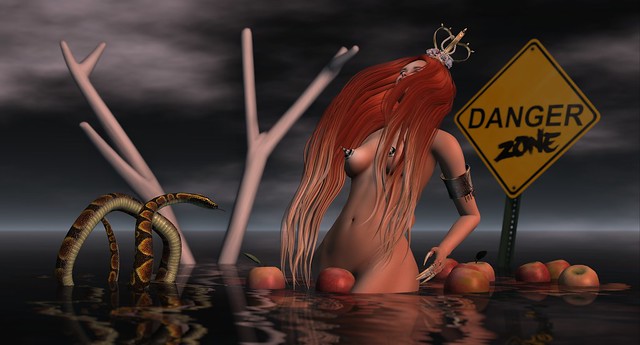 The September 2015 round of The Arcade Gacha will begin in just three days time and Tableau Vivant will be there with new hair which is wind and water themed – if you get my drift. I am wearing the RARE offering called Breeze, which given its length prompted me to think of a Lady Godiva-styled picture. But as I am not a fan of horses (real or virtual), I decided to plonk myself into some water with a snake, a danger sign and a slew of apples for company. 😀

Tableau Vivant \\ Editorial – Breeze [Rare] … made by M4ri1yn Magic. I am wearing this hair in a tone from the Redheads HUD. NEW.

+Half-Deer+ Minimalist Tree – Blue … made by Halogen Magic. Purchased in August 2015 when Half-Deer had a very quick one-day sale.

Serpent4 – Diesel Works … made by Rogan Diesel. Purchased in August 2013. The serpents are rezzable with built-in poses (just click and sit on them), or you can use them as a prop, which is what I have done here.

{what next} Orchard Fallen Apples Décor … made by Winter Thorn. Purchased on August 21st, 2015 as part of a Fifty Linden Friday décor set.

And lastly, the pose I have used is an lar [poses] Modern Series – Three … made by Katya Valeska. Purchased in December 2014.

This image was shot in the Love Ship SIM, which is currently decorated as a wintry North Pole-styled location. The SIM is owned by Crazychef Resident and will be open to the public from December 9th, 2014 through to January 10th, 2015. So you still have approx. 1½ weeks to visit it. Best of all you can rezz objects here, although be forewarned that there is only a ten-minute window before auto-return kicks in. But what it does mean is that you can rezz a pose stand and then add objects to your avatar if you don’t want them to bounce back into your Inventory in a hurry.