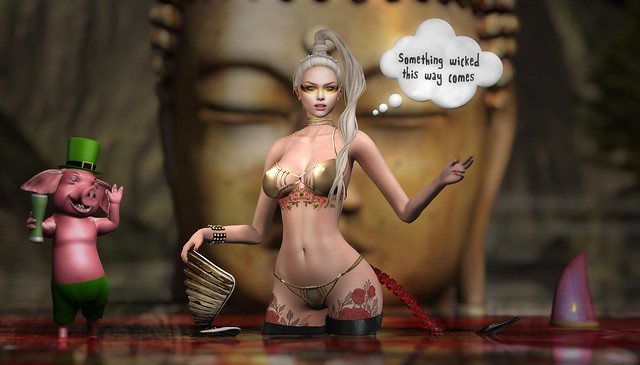 Although he always seems to be in that position – of course!! 😀

But as for my worn details, such as they are – please read on below.

RKKN. Lara’s Metal Bangle … made by Keon Xenga. Purchased at the most recent round of the Shiny Shabby event, which finished on September 15th. NEW.

*6DOO* Great Buddha Head Decor gold … made by ondo Mode. This big item was purchased in July 2018 at the 6DOO store inworld.
booN and 6DOO and HANAUTA @ SAIKIN

PFC~War Kitten – Wings … made by Pucca Firecaster. I have rezzed this wearable item because – well, they used to belong to an angel who showed up on the scene and I tore them off her body so that I could make the carnage begin!! Of course!!

The pose that I have used is -L- Can’t Go Back 5 … made by Adeline Blackthorne, a self-described “perpetual noob”. You can find Lalochezia Poses on Second Life MarketPlace. This pose belongs to the Can’t Go Back set and is available here:
-Lalochezia- Can’t Go Back Pose Set 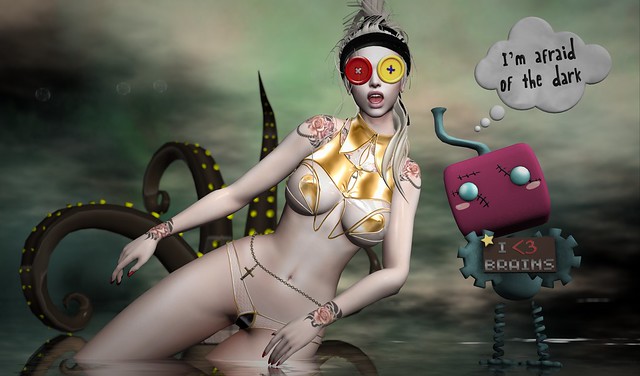 *6DOO* UKAUKA button eyes … made by ondo Mode. These were purchased on July 8th, 2018 at the 6DOO store inworld.
booN and 6DOO and HANAUTA @ SAIKIN

Denver’s Yuki Shape for CATWA Catya Bento Head … made by Magissa Denver.
This was available at the NEO-Japan event, which finished on April 22nd.
NB: This shape has been considerably modified by me.

baby Kraken in a barrel … made by minnie Tunwarm. Purchased on Second Life MarketPlace in February 2016.
Kraken in A Barrel

[ free bird ] Halloween Thought Bubble – Afraid of the Dark … made by Cortez Brandriss.

{Zomberry army} Charlotte .::Cubic Cherry Kre-ations::. … made by Kreao Kujisawa. I purchased this mega-cute item (which was part of a set) at the Level Up sales event back in September 2014 and luckily, that Zomberry Army set is still available. You can now purchase them on Second Life MarketPlace for just 15 lindens.
[Cubic Cherry] {Zomberry army} set MP PROMO

The pose that I have used is Amitie Miss You 06 … made by BELEN Ackland.