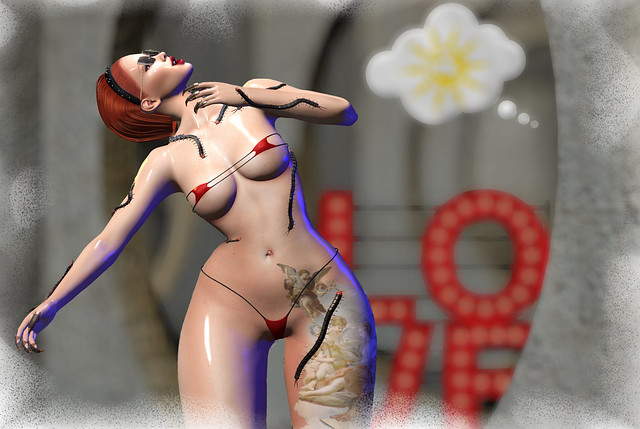 Courtesy of at least a half dozen big black and red centipedes which are migrating across my beautiful Glam Affair skin.

Anyway, this is how I am minimally kitted out today.

Tableau Vivant \\ Pearl hair … made by M4ri1yn Magic. I am wearing this short hair with a headband in a tone from the Reds pack. The Pearl hair was first available at the April/May 2019 round of KUSTOM9 but can now be found at the Tableau Vivant store inworld.
Pearl Hair @ Glam Affair & Tableau Vivant

veyard_ F07 Sunglasses … made by Veyard Ravenhurst. Purchased at the Tres Chic event in August 2020

Lilo’s FIT – Shape GENUS [Maitreya V.3] Chelsie … made by taliacrista Resident.
I purchased this curvy shape at a huge discount rate as a Kinky69 promotion in August 2020 but sadly it has now gone back to its full price at the Lilo’s FIT store.
LILO’s FIT – Bento Shapes & Mimmi Makeup @ Sorens

Ghoul – Centipest – ML – Scolopendra subspinipes … made by Ghoul Ichibara.
The spooky souls at Ghoul are currently having a 50% off sale at the moment (which includes all items except for their gachas), which is open from February 5th through until February 17th. In fact these Centipest attachments were purchased at the Ghoul Mainstore on February 6th.
Ghoul MAINSTORE 2021

DO INK Tattoo Le Tribunal Maitreya … made by Nel4481 Resident.
Purchased at the current round of the MiiX Event, which is open from January 30th through until February 20th, 2021. NEW.
MiiX Event

The pose that I have used is ..::DARE::.. “Flickering Doubt” … made by Chance Greatrex.