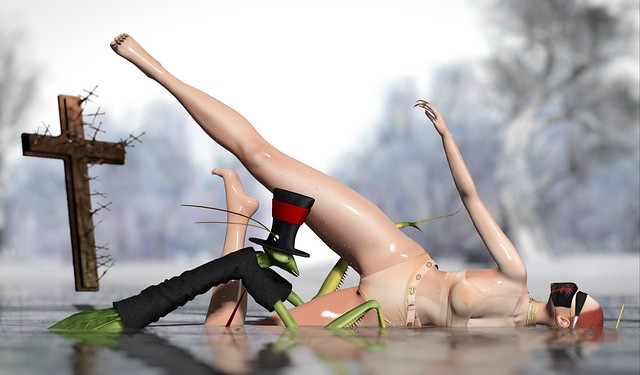 The German-speaking Bohemian novelist and short-story writer, Franz Kafka was born in the city of Prague in what is now Czechia on July 3rd, 1883. Widely regarded as one of the major figures of 20th-century literature, his work fused elements of realism and the fantastic. Perhaps the most famous of his works is the short story “The Metamorphosis”, written in 1912 and published in 1915. Its opening words begin as follows: “As Gregor Samsa awoke one morning from uneasy dreams he found himself transformed in his bed into a gigantic insect.”

Well, Alles might not be a giant insect but she does seem to have one who wants to be her friend – or perhaps to be her lover? xD

{ViSion} // Ysabel Set – #8 … made by pjey Pearl. It’s mah bikini, ladies!!
This was purchased as one of the 35 different colours in the Ysabel Set FatPack on January 16th, 2021 – you can also buy the individual colour sets for 60 lindens each while the Happy Weekend sale lasts.
Ysabel Set @ {ViSion} Mainstore