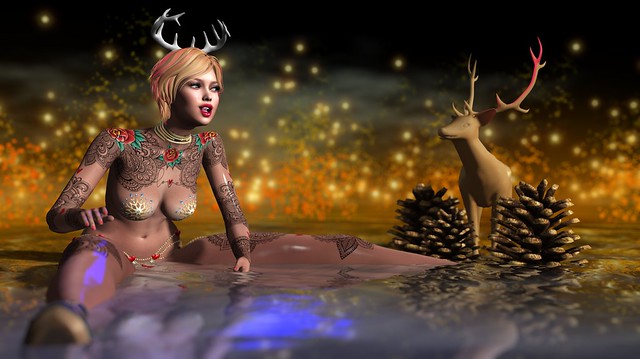 With another deer of course!! 😀

And so, from top to bottom this is how Alles is kitted out today.

Tableau Vivant \\ HolyMals – Deer [Rare] … made by M4ri1yn Magic. I am wearing this short hair with an attached antlers headband in a tone from the Reds pack. The HolyMals hair is available now at the current round of The Arcade Gacha, which is open from December 1st through until December 31st. NEW.
The Arcade

NANIKA – Snowflake Nipples blink Gold – Maitreya … made by NanikaCrimea Resident. Purchased at a discount rate of 60 lindens on December 12th, 2020 as it was part of a Happy Weekend promotion. And despite the fact that the weekend is now over the Snowflake Nipples (five colours available) are still on sale at that price.
Nanika Mainstore @ Dulcis

The pose that I have used is {NanTra} Party_girl5 … made by Tracey Redangel. This pose was tweaked by me inworld through the use of my Animare HUD.