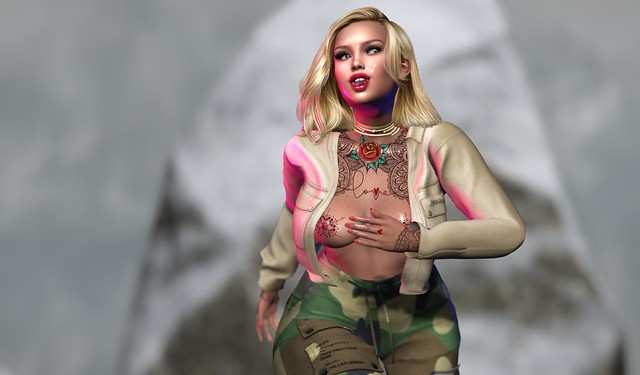 To be out in the winter’s cold without a crop top or even a bra to cover her boobs, cos that jacket just won’t do!! xD

Those issues aside, this is how pretty cool Alles is kitted out today.

WINGS-TZ1120-HAIR (Medium) … made by WINGSDG Resident. I am wearing this super cute hair in a tone from the Gold pack. Purchased at the latest round of Anthem which is open from December 3rd through until December 30th. NEW.
Anthem Event

SCLT – Maxima Cropped Jacket BEIGE (ML) … made by babyspicy Resident.
SCLT – Maxima Cargo Pants CAMO (ML) … made by babyspicy Resident.
Both of these items were purchased at a discount rate of 60 lindens each on December 6th, 2020 as they were on sale as part of a Happy Weekend promotion. And despite the fact that the weekend is now over they are still on sale at that price.
Maxima @ SOCIALITE Mainstore

The pose that I have used is SAPA Poses 93.10 … made by NadySapa Resident. This pose is part of the SAPA Poses 93 set.