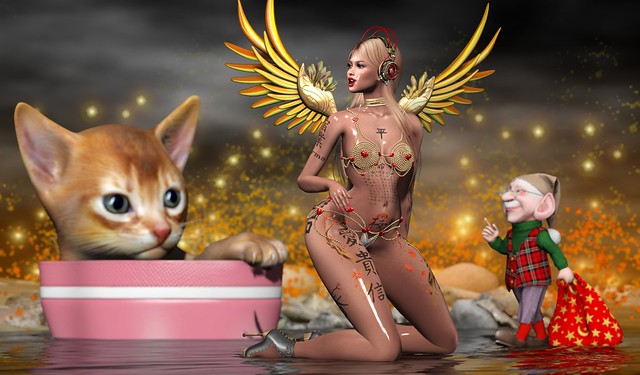 So today, this is how Alles is kitted out from top to toes!! 😀

MINA Hair – Joye … made by Mina Nakamura. Joye is a beautiful long silky hair style that tucks behind the ears … which was available at the November 2020 round of FaMESHed! But it will be available at the MINA Hair Mainstore very soon. NEW.

Yokai – Ice Wings (Gold Dust) … made by Olikato resident. I purchased the wings at Enchantment in November 2019 but they’re now at the Kaleidoscope Island mall.
Ice Wings @ Yokai Store

[BB] Kitten in Fall Rain Boot Decor 01 … made by Stasey Oller.
Purchased as part of a set at The Outlet Infinity Event on November 16th. NEW.
[Black Bantam] @ The Outlet: A Seraphim Infinity Event

Mutresse-Santa Helpers-19 … made by Eeky Cioc. This is a common item that can be won on the Mutresse gacha machine at the very next round of The Arcade Gacha, which begins on December 1st. NEW.

The pose that I have used is shi.s.poses BENTO woman #74 – flat … made by Shiva Rowley.