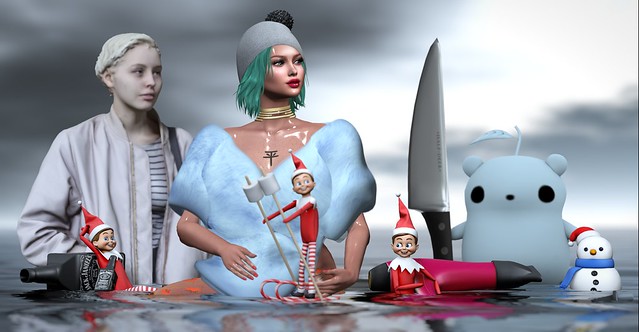 Well, at least Alles is cos I am wearing this nice pale blue fur from Giz Seorn. And some other some stuffs too! 😀

Tableau Vivant \\ Puffy hair [windy] … made by M4ri1yn Magic. I am wearing this short hair with a pom-pom adorned beanie on top in a tone from the Colors pack. The Puffy hair – which also features a windy version – is available now at the latest round of Uber, which is open from November 25th through until December 22nd. NEW.
Uber
OR
~Uber~ Cam Shopping @ Harajuku

GIZ SEORN: ‘Csilla’ Shoulder Fur [FatPack] Lara & Lara Petite … made by Giz Seorn. The shoulder fur which covers all of your front “bits” is available now at the latest round of Uber, which is open from November 25th until December 22nd. There is also a matching ‘Csilla’ body suit available at Uber as well. NEW.
Uber
OR
~Uber~ Cam Shopping @ Harajuku

The pose that I have used is one half of a two-person pose, namely [ west end ] Bento Poses – Yours For The Taking – Couples … made by Beloved Ruby.