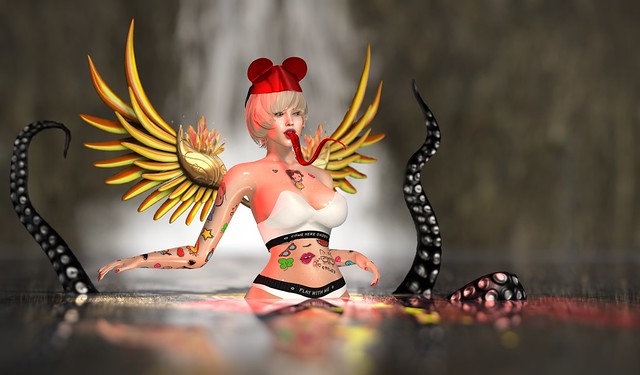 Kiss me below the belt, of course!! 😀

As for my worn details, this is how Alles is kitted above and below the belt.

.Shi Hair : Machseh . LBlonde … made by Joy Laperriere. Purchased at the latest round of Uber, which is open from August 25th through to September 22nd. NEW.
Uber

+ Aka shita Tongue size S + {egosumaii} … made by DevilAii Resident.
This was originally purchased at the Baroqued Orientilika event in March 2019, however you can now find if downstairs at the Aii & Ego Main Store in Mai Tai.
Aii & Ego Main Store, Sphere of Nuvaria

Pop TaTToo Kawaii [CAROL G] Maitreya … made by Carolina Gaelyth. Purchased at the latest round of Uber, which is open from August 25th until September 22nd. NEW.
Uber

Yokai – Ice Wings (Gold Dust) … made by Olikato Resident. I purchased the wings at Enchantment in November 2019 but they’re now at the Kaleidoscope Island mall.
Ice Wings @ Yokai Store