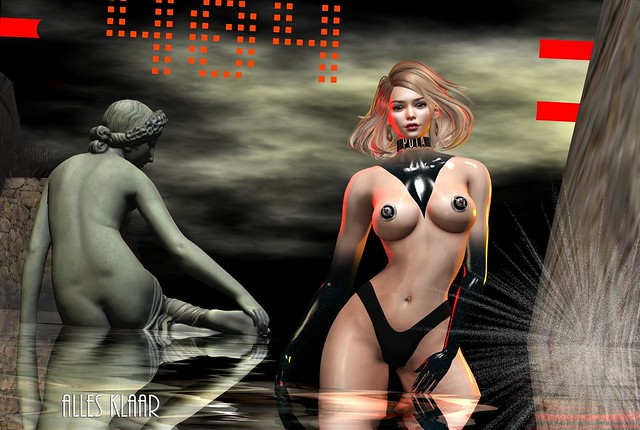 One of the most common computer error messages is the 404 page not found. In fact, its origin goes back to the beginning of the internet. Essentially, it means the page you’re looking for cannot be found.
(https://www.allconnect.com/blog/404-page-not-found-error-explained)

But hey, you have found your way to this page so the message must be wrong! Right?

Moving right along, this is how Alles is dressed in this rather wet scene.

Tableau Vivant \\ Nany hair … made by M4ri1yn Magic. I’m wearing this medium length hair in a tone from the Fades pack. Nany is available now at the anniversary round of Collabor88, which is open from August 8th through to September 6th. NEW.
Collabor88
OR
Collabor88 Cam Sim 1 (Collabor)
OR
Collabor88 Cam Sim 2 (Shopping)

[[ Masoom ]] Ursula Thong- Lara … made by Amber Takeda. Purchased at the latest round of equal10, which is open from August 10th through to September 5th. NEW.

The pose that I have used is Diesel Works SeptGift5 … made by Rogan Diesel.