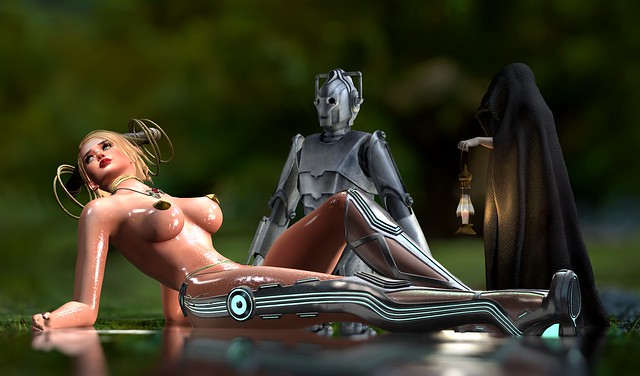 Tableau Vivant \\ Rebel Hair [F] … made by M4ri1yn Magic. Rebel is a short unisex hair (I’m wearing the female version) which is available at the latest round of Uber, which is open from April 25th until May 22nd. NEW.
Uber
OR
Harajuku – Uber Cam Shopping SIM 1

THIS IS WRONG Puzzle Shine 3D – Maitreya … made by Eva Artemesia. Purchased at Spring Flair, which is open from April 9th through until April 30th. NEW.
Spring Flair

JamBee > Clothes > PVC strappy bottom > Maitreya Lara … made by JambeeSHOP Resident. This is the lower half of the PVC strappy bikini by JamBee, which was originally released in June 2018 but is still available inworld.
JamBee Store @ Pink Heaven

r2 A/D/E sayori boots[Silver]Maitreya … made by rei2 Aya. The sayori boots are available now at the current round of Collabor88, which is open from April 8th through until May 6th. NEW.
Collabor88