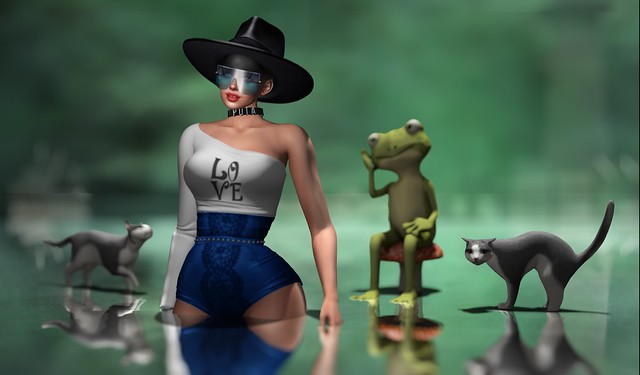 Or did I mean we should have a better world for the sake of our cats and dogs? Oh, never mind!! 😀

As for my kit in this green-hued scene, Alles is decked out as follows.

Baiastice_Cady Fedora Hat … made by Sissy Pessoa. The Cady fedora hat is available now at the latest round of FaMESHed, which is open from April 1st through until April 27th. NEW.
FaMESHed

MAJESTY – Ari Shades [aqua] specular … made by Piinky Chrome. Purchased at the latest round of the LEVEL Event, which is open from April 1st until April 24th. NEW.
LEVEL

{WitchCraft Luciferia Bento Shape … made by WitchCraftxoxo Resident.
Purchased at the previous Necrosis Event, which finished on February 14th.

GIZ SEORN : Nyx Corset Suit [FatPack] Lara … made by Giz Seorn. The Nyx corset suit is available now at the current round of Uber, which is open March 25th through until April 22nd. NEW.
Uber

The pose that I have used is Le Poppycock-As ever (TWEAKED).