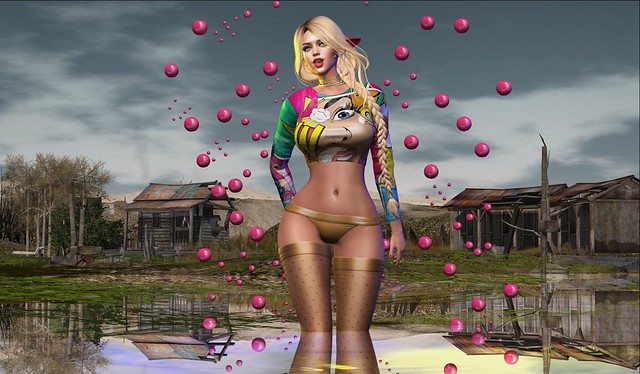 And so, this is how I am kitted out from the top of my pretty head to my thighs.

GIZ SEORN : Comic Book Top / Lara … made by Giz Seorn. This is the top half of a two-piece outfit which is a 60 linden offering for Happy Weekend until midnight.
Comic Book Outfit @ GIZ SEORN

erratic / ciri – stockings nofeet / FATPACK dots (maitreya) … made by Erratic Rain. This is a new release at the erratic / mainstore inworld. NEW.

The pose that I have used is Lyrium – Anne Pose 3 [m] … made by Ni Avril. However this pose was given a slight tweak inworld by moi as I moved the position of my head by using my Animare HUD.