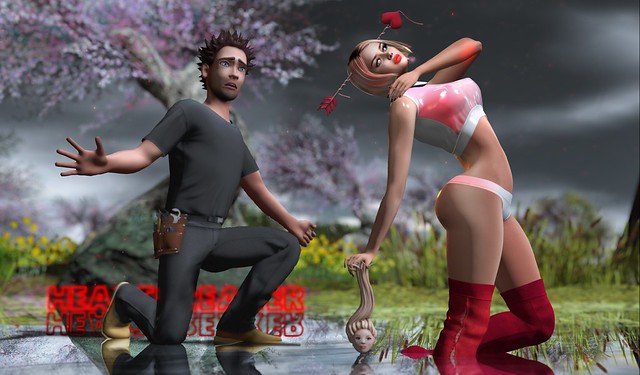 Nothing is fun – not like before. Cos Mr. Fixit, you don’t get me high anymore!! xD

(And yes, I know that the Billie Eilish version has got five million views on YouTube but Alles is a fan of the original!)

That issue aside, this is how Alles is kitted out today.

Caboodle – Cupid’s Arrow … made by Erovi Resident. Purchased at at 2020 round of Cupid Inc., which is open from February 5th through until February 25th. NEW.
Cupid Inc.
I should add that wearing Cupid’s Arrow did lead to this response when I was visiting the Maitreya Mainstore to get my Lara V. 5.0 update:
[23:56] Tilrand Resident taps the arrow..”You should see a doctor… that can’t be healthy

Tableau Vivant \\ Lovely … made by M4ri1yn Magic. I am wearing this short, bob-style hair in a tone from the Blonds pack. Lovely is available at the 2020 round of Cupid Inc., which is open from February 5th through until February 25th. NEW.
Cupid Inc.

TETRA – Fishnet Stretch-silk Thong – Maitreya … made by NataPorolo Resident.
This is part of a TETRA – Stretch-silk Lingerie (Fatpack) set that I purchased in August 2016.