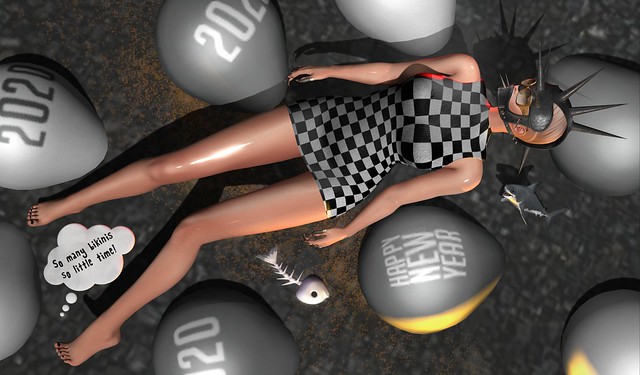 Or given the rather “under the weather” state that Alles has found herself in, should this be the “Snoring Twenties” instead? 😀

Jokes aside, this is how Madame Alles is kitted out at the end of her evening.

AZOURY – Peu de Mots {Mod/Copy with Resize} … made by Aniki Seetan.
This amazing mask is available at the current round of FaMESHed X, which is open from December 10th through until January 6th, 2020. NEW.
FaMESHed X

Maitreya Mesh Body – Feet V4.1 … made by Onyx LeShelle.
NB: Something tells me that I might have lost my shoes!! xD

HERA – Colour Mix Highlight Projectors – Red/Orange … made by MidnightMistxX Resident. Although this item is worn as an attachment, the wearable projectors are best described as a prop.

[ free bird ] Summer Thought Bubble – So Many Bikinis! … made by Cortez Brandriss.

GOOSE – Party balloons … made by tyrek Resident. Purchased as part of

Pose is Lyrium. Jar Pose 2 at 90 degrees then tweaked a bit