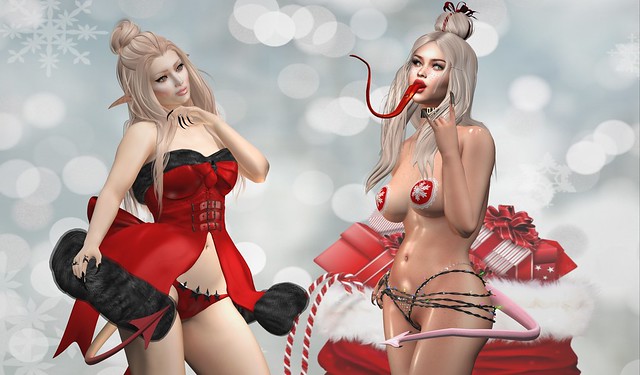 LOVERDAG – on the left – is wearing the following:

Tableau Vivant \\ Ugly Gift bun … made by M4ri1yn Magic. This is available at the Santa Inc. event as a 50 linden purchase which you can either buy for yourself or as a gift for a friend. You can find it at the bottom right-hand corner of the Lost & Found Office wall at Santa Inc. The Ugly Gift bun works as an add-on for the Santina hair. NEW.
Tableau Vivant \\ Santina … made by M4ri1yn Magic. I am wearing this mid-length hair in a tone from the Blonds pack. The Santina hair is also available at the noo Santa Inc event, which is open from December 7th to December 27th. NEW.
Santa Inc. by } Novel Events { @ Feather

+ Aka shita Tongue size S + {egosumaii} … made by made by DevilAii Resident.
+ Open Mouth animation + {egosumaii} … made by DevilAii Resident.
This was originally purchased at the Baroqued Orientilika event in March 2019, however you can now find if downstairs at the Aii & Ego Main Store in Mai Tai.
Aii & Ego Main Store, Sphere of Nuvaria