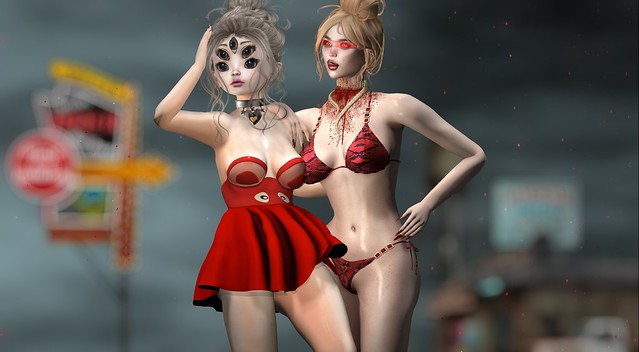 [Black Bantam] Cyclops Cutie Doll RP Head … made by Stasey Oller.
Available now at the latest round of Collabor88, which is open from September 8th through until October 6th. NEW.
Collabor88

Pure Poison – Panda Dress – Maitreya … made by Shaleene Kenin. The Panda dress is available now at The Ark event, which is open from September 13th until September 22nd. NEW.
The Ark

Tableau Vivant \\ Bunbun hair … made by M4ri1yn Magic. I am wearing the Bunbun hair in a lighter tone from the Reds pack. The Bunbun hair was available at the previous round of Collabor88, which sadly finished on September 6th. NEW.

Kaithleen’s Barbed Wire Choker for HER x 3 … made by Zlyskritek Resident.

The sole prop that I have used is – {anc} chemical sparks {strontium red} 1Li … made by aki69 Resident.