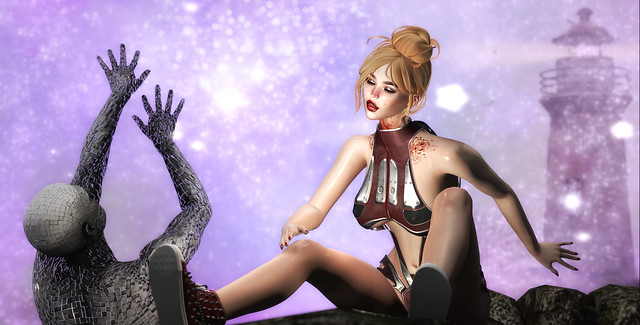 It’s a bright and starry night at the Netherwood SIM and after finding a blood doll to feast upon, Alles is licking her lips after a juicy lunch of blood. Roll on Halloween!! 😀

And this is how bloodied Alles is kitted out, from her top to her covered toes.

Tableau Vivant \\ Bunbun hair … made by M4ri1yn Magic. I am wearing the Bunbun hair in a tone from the Reds pack. The Bunbun hair was available at the previous round of Collabor88, which finished on September 6th. NEW.

+Half-Deer+ Patch of Galaxy – Purple (Big) … made by Halogen Magic.
Which is obviously the colourful mist-like backdrop to this image. Purchased at the previous round of Collabor88, which sadly finished up on September 6th. NEW.