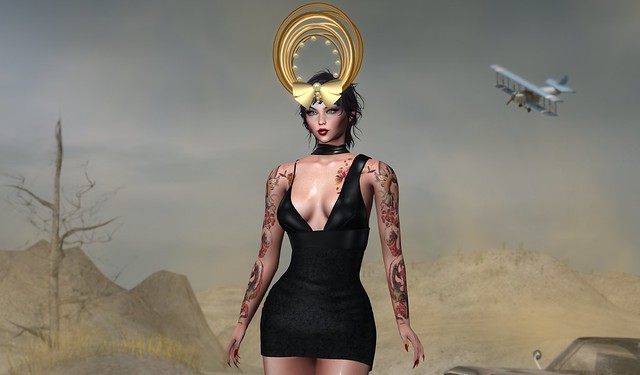 And after raising a storm, Alles remembered to jot down her worn details. So, here they are for you, from the top of my head to just above my knees! 😀

” Ballon Hat Gold ” ******** BaObA ******* … made by petalos Clary. This hat was brand new in August 2014 but sadly the maker no longer has a store in Second Life or a presence on Second Life MarketPlace. Which is rather sad as she made very distinctive hats, which were just perfect for quirky individuals like me.

tram I0528 hair … made by moca Loup. I am wearing this “dangerously cute” short hair in one of the pastel tones from the FatpackExclusive HUD. Purchased at the current round of Collabor88, which is open from June 8th through until July 6th. NEW.
Collabor88

The pose that I have used is SEmodeling-33 … made by Marie Sims.
This is part of SEmotion Female Bento Modeling poses Set 4 – 10 static poses, which you can purchase on Second Life MarketPlace or inworld at SEmotion Studio.
SEmotion