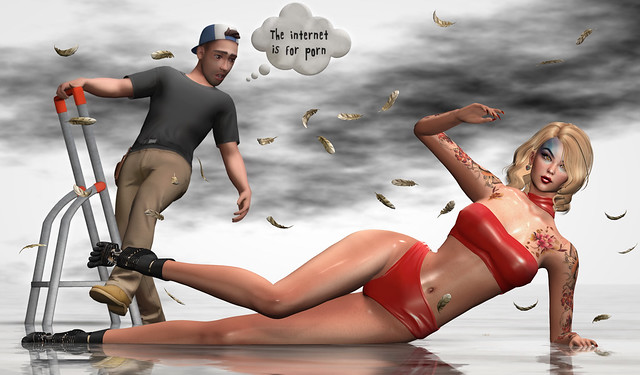 Tableau Vivant \\ MinaPina hair … made by M4ri1yn Magic. I am wearing this kinda retro-styled hair in a tone from the Reds pack, although once again I have more of a strawberry blonde appearance than that of a true redhead. The MinaPina hair will be available at the next round of KUSTOM9, which starts on June 15th. NEW.

Mutresse-Falling-Mr FixIt … made by Eeky Cioc. The Mr Fixit series was the Mutresse offering at the June 2017 round of The Arcade Gacha but you can still test your luck inworld on the Mutresse gacha machines at the Mutresse mainstore.
Mutresse Gacha Machines @ Mutresse Original MESH Clothes, Shoes and Accessories

[ free bird ] Group Thought Bubble – The internet is for… … made by Cortez Brandriss.