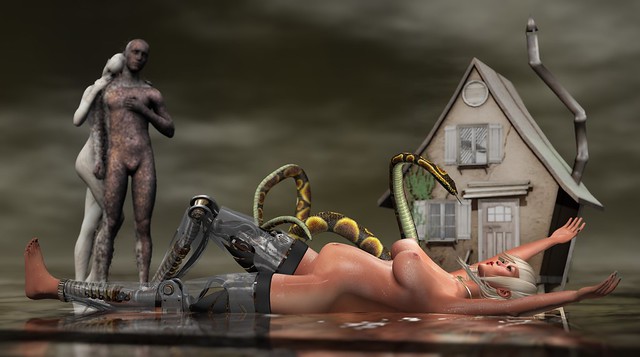 Although I probably didn’t have a surrender to a snake in mind!!

Anyway, stick around, cos now I’m going to tell you all about my worn details from the top of my head to my still very human toes!! 😀

.Shi Hair : Quixotic / Unisex . LBlonde … made by Joy Laperriere. I purchased this fabulously avant-garde hair at the Uber event back in August 2016 but you can still get the Quixotic hair at the Shi Flagship store or on the Second Life MarketPlace.
Shi Flagship @ After 6 Days

-Narcisse- Xiola Metal Gem Collar – New Gold … made by Narcisse Resident.
This was purchased as part of a FatPack at the most recent round of The Liaison Collaborative, which finished on February 26th. NEW.