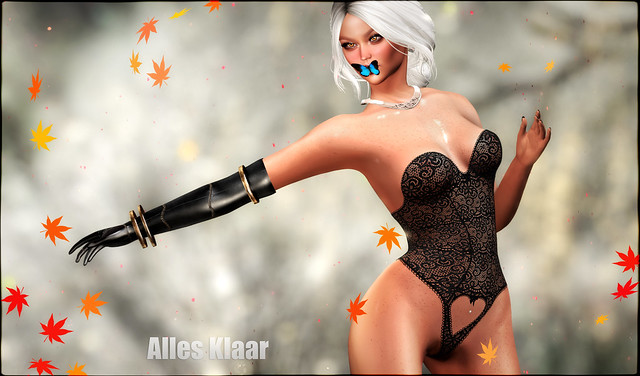 As for her worn details, one hot Alles is kitted out in this manner.

Navy+Copper – Eva (Touch to Resize) … made by Gia Pawpad. I am wearing this gorgeous short hair in a tone from the Grayscale pack. Purchased at the debut round of the Sultry event, which is open from February 13th until March 2nd. NEW.
Sultry

~Nerido~ Heart Bodysuit(Maitreya)-Black … made by Lina Nerido.
Purchased at the debut round of the Sultry event, which is open from February 13th until March 2nd. NEW.
Sultry

[Cubic Cherry] {Talis} glove R (maitreya) … made by Kreao Kujisawa.
I purchased the matching Talis gloves (I’m not wearing the left hand glove) at the current round of We Love Role-Play, which is open from February 4th through until February 28th. NEW.
We Love Role-Play

The sole prop that I used is {anc} chemical sparks {strontium red} 1Li … made by aki69 Resident. (The autumn leaves were done using the Filter Forge plug-in).

The pose that I have used is FOXCITY. Moody-3m … made by Satomi Masukami. However I did change the position of both my left and right arms by using my Animare HUD.