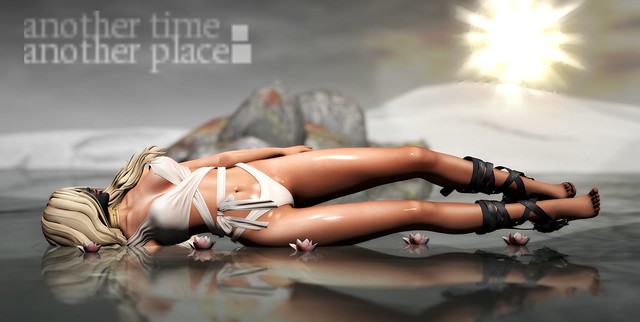 MINA Hair – Tiffany (Bigger breasts) … made by Mina Nakamura.
I am wearing this hair in a tone from the Blonds pack. Tiffany is available now at the Salon 52 event, which is a brand new event on the Second Life shopping scene that is open from January 10th through until February 4th. NEW.
Salon 52 @ MINA Hair

+ Celestial Halo (Iustitia) + {aii} … made by DevilAii Resident.
Although this item is actually a wearable I shifted it from my body so it would serve as the “Midnight Sun” in this blog post image.

The pose that I have used is SEmodeling-438 … made by Marie Sims. However I loaded the set of poses to which this one pose belongs into a pose stand and then tilted the pose stand at 90 degrees so that I was horizontal. And then tweaked the position of my left arm by using my Animare HUD.