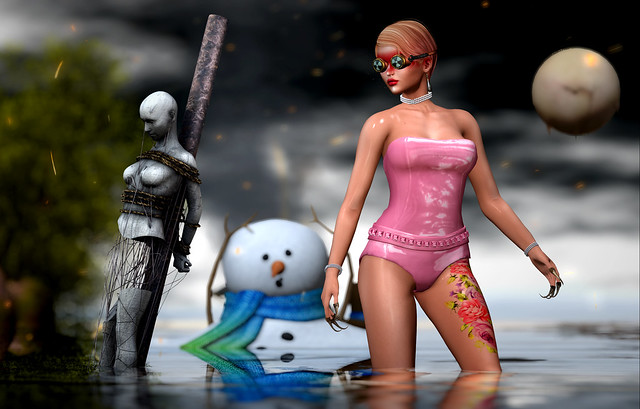 Mimikri – Go-Go Vinyl Bodysuit pink … made by Mimikri Kit. The Go-Go bodysuit along with an accompanying jacket is available now at the latest round of Cosmopolitan, which is open from November 19th through until December 1st. NEW.
Cosmopolitan Event

Klaris Roses – Tattoo Applier [CAROL G] Maitreya … made by Carolina Gaelyth. Purchased at the latest round of Cosmopolitan, which is open from November 19th through until December 1st. NEW.
Cosmopolitan Event

-Narcisse- Edith Bracelet (L) … made by Narcisse Constantine.
-Narcisse- Edith Bracelet (R) … made by Narcisse Constantine.
The Edith set (bracelets and choker) was first available at the Cosmopolitan Event back in September 2017 but it is now available instore, where you can pick it up for a reduced price as part of the current Black Friday sales until November 29th.
Narcisse Mainstore – Formal Section

Bonfire of Broken Chairs … made by Angharad Greggan.