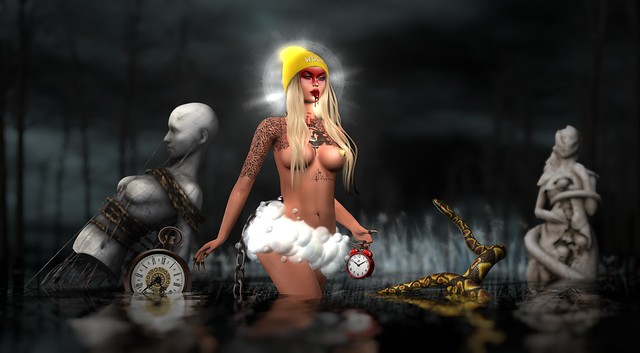 When she has spooky statues and a slithering snake for company?

As for her worn details, this is how “She-Wolf” Alles is kitted out from tip to waist and a bit below.

Lamb. Wide Awake … made by Lamb Bellic. I am wearing this hair with a colourful beanie in a tone from the Dark Blonde pack. This hair was a Saturday Sale item on November 17th, 2018 but it’s still available in the Lamb Mainstore – so head on over.
Lamb Hairstore

[CX] Bloody Tongue … made by Kamayari Resident. This is a group gift for the [CerberusXing] Update Group which I got back in September 2016 but is still available for group members inworld. It costs a mere 50 lindens to join the group.
[CerberusXing] Mainstore

New York – TaTToo Applier [CAROL G] Maitreya … made by Carolina Gaelyth.
Purchased at the most recent round of the Cosmopolitan Event, which finished on November 17th. NEW.

Right Nipples For Maitreya Body … made by kathrine Asteria.

LISP Clock Head (don’t wear me) … made by Pandora Popstar.