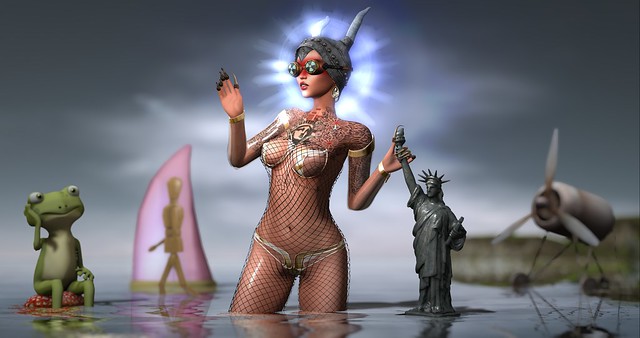 This is a scene from my very short play which is most definitely not to be confused with Marat/Sade, or to give that play its full title, The Persecution and Assassination of Jean-Paul Marat as Performed by the Inmates of the Asylum of Charenton Under the Direction of the Marquis de Sade. Oui?

As for the fashion details of said performance by the Blessed Alles, this how I am kitted out and more.

Meva Cap with Horns 2 … made by Mea Carnell.

New York – TaTToo Applier [CAROL G] Maitreya … made by Carolina Gaelyth.
Purchased at the current round of the Cosmopolitan Event, which is open through until November 17th. NEW.
Cosmopolitan Event

.BF. Love Fishinet Black -Maitreya- … made by Sonnya Finesmith.
Purchased at the current round of the ROMP Event, which is open now from November 10th through until November 24th. NEW.
ROMP

{BE} Statue of Liberty … made by pokute Burt.

The pose that I have used is K&S – // I see something // 1 … made by KatyaSessions Resident. Purchased as part of an I See Something set at the current round of the Vanity Event, which is open November 5th until November 25th. NEW.
Vanity Event