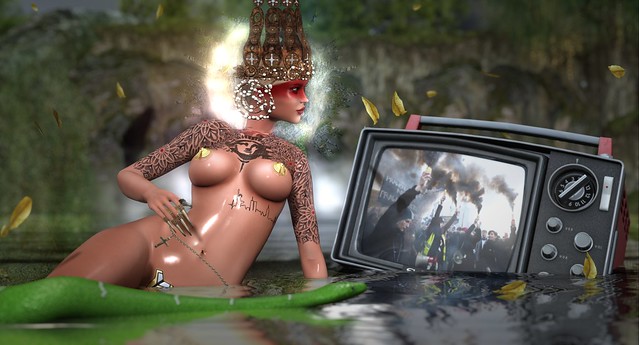 I’m just looking at the World Population Clock and the number of women in the world currently stands at 3,794,934,000 or thereabouts … and by the time I finish this blog it will have crept ever closer to 3.8 billion women in the world. Which certainly makes women’s rights, human rights as well – no matter where we live on the globe.

Well, that bit over polly speak over, these are my worn details – if you care to know.

New York – TaTToo Applier [CAROL G] Maitreya … made by Carolina Gaelyth.
Purchased at the current round of the Cosmopolitan Event, which is open through until November 17th. NEW.
Cosmopolitan Event

Asteria – Body Accessories For Maitreya – [Gold] … made by kathrine Asteria.

The pose that I have used is FOXCITY. Beach Bunny-6 … but modified by moi (position of right arm was changed).