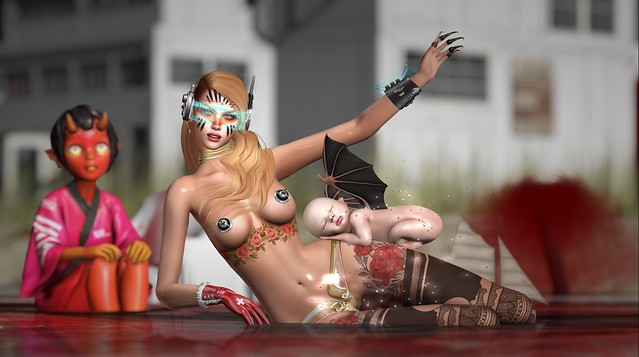 As for my worn details and other fancy stuff, please read on below to find out what I’m wearing from the top of my head right down to my knees.

Tableau Vivant \\ Rosemary hair … made by M4ri1yn Magic.
I am wearing this “herb-flavoured” hair in a ginger tone from the Reds pack. Rosemary – the hair, not the herb – is available now at the SALEM Event, which is open from September 29th through until October 31st. NEW.
SALEM – Macabre Market & Gallows Gacha

*Queen oF Ink – City of roses V2 Tattoo [Limited Edition] … made by MonaSax95 Resident. Purchased at the round of Limit8 which finished on September 13th. Sadly, this tattoo was sold out well before the event finished. NEW.

S&P Blood Fountain … made by xxSaltandPepperxx Resident. Purchased at the SALEM Event, which is open from September 29th through until October 31st. NEW.
SALEM – Macabre Market & Gallows Gacha

Blood Drops (MUCH BIGGER – 50% Transparency) … made by Lloksa Resident.