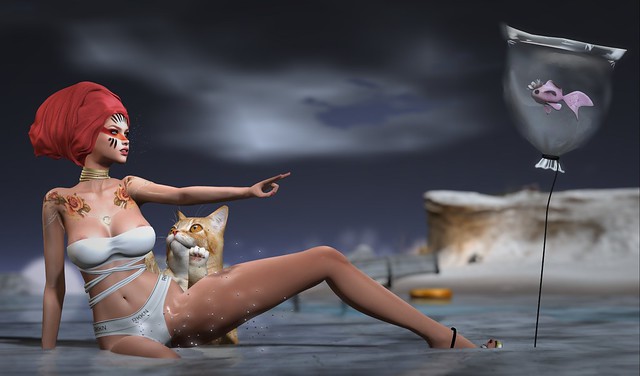 Well, isn’t the cat lucky because tonight the fish is already in the bag!!

Now as for her bloggy bits, this is how Alles is kitted out.

Baiastice_Aisha Turban-Red … made by Sissy Pessoa.
You can get the Aisha turban at any of the Bandana Day booths at Hair Fair 2018, which is open from September 22nd through until October 7th. It costs 50 lindens and 100% of the proceeds from your purchase will go to the Wigs For Kids charity. NEW.

Jewel Roses – Tattoo Applier [CAROL G] Maitreya … made by Carolina Gaelyth.
I purchased this gorgeous tattoo which is available in four different shades at the latest round of the Cosmopolitan Event, which is open from September 24th through until October 6th. NEW.

AngelFish Alice Top Maitreya … made by Nefrytka Resident. This was a gift to me from the creator. ❤

Mutresse-Left Out-Shortie Cats … made by Eeky Cioc.
This is a common prize on the Mutresse gacha machine at the September 2018 round of The Arcade Gacha. NEW.
The Arcade

+Half-Deer+ Skellyfish Balloon with Love Goldfish … made by Halogen Magic.

The pose that I have used is Amitie – Tabatha 08 … made by susi Firanelli. However this pose was slightly modified by me by using my Animare HUD inworld.