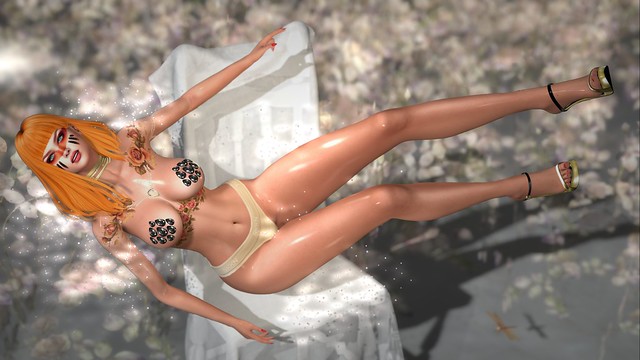 As for her fashion details, this is how the orange angel (aka Alles) is kitted out.

MINA Hair – Frankie … made by Mina Nakamura. I am wearing this straight hair in a tone from the Reds pack. Frankie is available now at Hair Fair 2018. NEW.
MINA Hair @ Hair Fair 2018 (Blonde SIM)

Jewel Roses – Tattoo Applier [CAROL G] Maitreya … made by Carolina Gaelyth.
I purchased this gorgeous tattoo which is available in four different shades at the latest round of the Cosmopolitan Event, which is open from September 24th through until October 6th. NEW.

Roses Underboob – Color [CAROL G] Maitreya … made by Carolina Gaelyth.
I purchased this gorgeous tattoo which is available in four different shades at the round of the Cosmopolitan Event which finished on August 11th. NEW.

The two props that I used are as follows:

6.DRD LN draped chair … made by Deathrowdesigns Resident.
This is actually part of the SIM’s furnishings but I sat on the chair and then overrode the inbuilt poses with a pose from my own inventory.