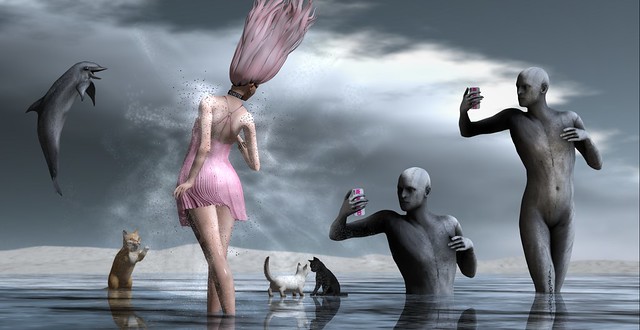 This was supposed to be a photo-session for me but as you can see the two beefy hunks who I arranged to take my picture seem to be far more interested in taking selfies rather than the agreed pictures of sweet little moi!! 😦

Oh well. Despite their inattention, I did scribble down my worn details and these are they, dear readers.

Tableau Vivant \\ Falling hair – Downfall … made by M4ri1yn Magic.
I am wearing this “upstanding” hair in a tone from the Colors pack. Downfall is one of four different hairstyles that you could win on the Tableau Vivant gacha machine at the latest round of The Arcade Gacha, which is open from September 1st through until September 30th. NEW.
The Arcade
OR
The Arcade 2
OR
The Arcade 3

Giz Seorn – Beverly Dress [Baby Pink] Maitreya Lara … made by Giz Seorn.
The super cute Beverly Dress is available now at the current round of the Dubai Event, which is open from August 20th through until September 10th. NEW.
Dubai Event

JIAN Dolphin Deco :: Baby – Static – Jumper B … made by JianSL Resident.
The Dolphin Deco set – of which this is just one item – was available at the previous round of FaMESHed, which finished on August 27th. NEW.

The pose that I have used is *PosESioN* Morte 4 … made by Dahriel Resident.