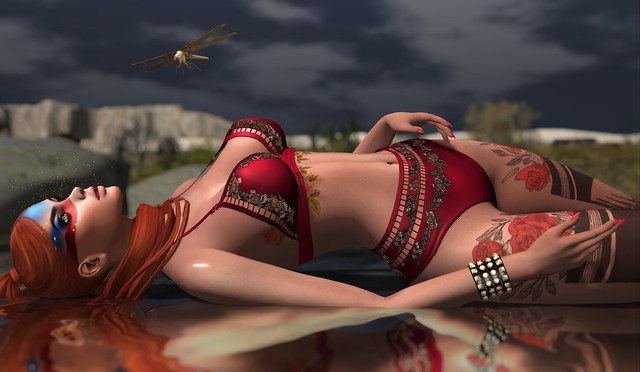 One of the great aspects of Second Life is the ability to change the hair colour of your avatar at whim and not suffer any consequences whatsover. So I donned this new hair and hairbase from Tableau Vivant and went redhead again, although if you follow this blog you know that I’m generally a blonde!! 😀

As for the sum total of my worn details, please read on below.

RKKN. Lara’s Metal Bangle … made by Keon Xenga. Purchased at the latest round of Shiny Shabby, which is open from August 20th through until September 15th. NEW.

.Enfant Terrible. Verelis Dragonfly … made by

The pose that I have used is WRONG & The Owl. Impeccable … made by LiFetisova Resident.