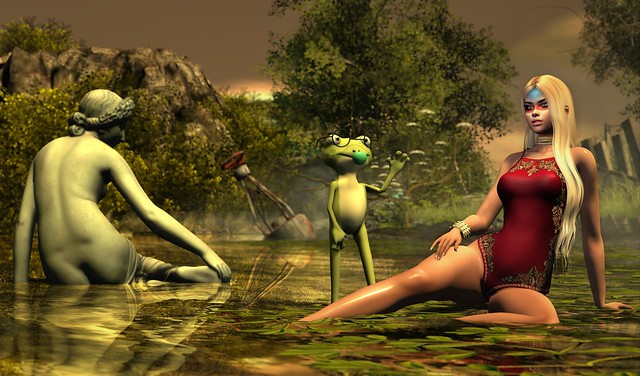 And ignoring the frog – of course!! 😀

Tableau Vivant \\ Laryil … made by M4ri1yn Magic. I am wearing this long, lustrous hair in a tone from the Fades pack. Laryil is available now at the current round of KUSTOM9, which is open from August 15th through until September 10th. NEW.
KUSTOM9

Giz Seorn – Poppy Swimsuit [Red] Lara … made by Giz Seorn.
The Poppy swimsuit is available now at the latest round of the Vanity Event, which is open from August 5th until August 25th. NEW.
Vanity Event

RKKN. Lara’s Metal Bangle … made by Keon Xenga. Purchased at the latest round of Shiny Shabby, which is open from August 20th through until September 15th. NEW.

Silas Museum collection 2 Gacha 06 La nymphe de Salmacis … made by Silas Merlin. This is a common gacha item that I “won” at the latest round of Shiny Shabby, which is open from August 20th through until September 15th. NEW.

The pose that I have used is besa-casual-9v2 … made by Yabesa Resident.