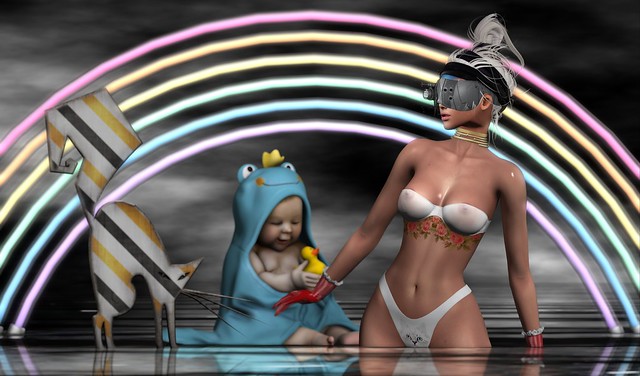 But most definitely not eating refried beans!! 😀

As for my worn details, this is what Alles is wearing.

.Shi : Eirene … made by Joy Laperriere. I am wearing this unisex hair with a headband in a tone from the Mono pack. Eirene – which translates to “peace” in Greek, was available at the March/April 2018 round of Uber but can now be purchased on Second Life MarketPlace as well as inworld at Joy’s Mainstore.
.Shi Flagship

AZOURY – Unbreakable Mask Black/Silver {Mod&Copy] … made by Aniki Seetan.
Unfortunately you had to be very quick to get this marvellous item, which was available at the latest round of Limit8 – as it has been already sold out. SAD!!

[Black Bantam] The Frog Prince Bath Baby 03 Blue … made by Stasey Oller.
This is a gacha “prize” that I purchased at the latest round of KUSTOM9, which is open from August 15th through until September 10th. NEW.
KUSTOM9