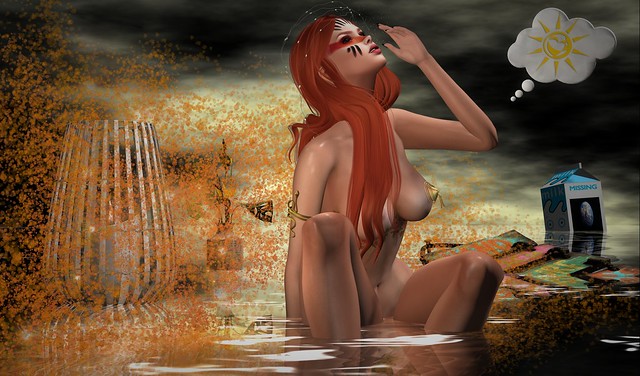 As for my worn details, you can catch up with them in the lines below.

Tableau Vivant \\ Nana hair … made by M4ri1yn Magic. I am wearing this hair in a tone from the Reds pack. The Nana hair was available at the previous round of Collabor88 which finished on August 6th but can now be found instore. NEW.
Tableau Vivant @ Beauty Avatar Couture

Right Nipples For Maitreya Body … made by kathrine Asteria.

Roses Underboob – Color [CAROL G] Maitreya … made by Carolina Gaelyth.
I purchased this gorgeous tattoo which is available in four different shades at the current round of the Cosmopolitan Event, which is open July 30th to August 11th. NEW.
Cosmopolitan Event

gold dust (add to Left Foot) … made by Venus Adored.

The gold dust is a particle effect and I bought it here:

The pose that I have used is Bauhaus Movement – Hearts Burst Into Fire 01 … made by LouLou Teichmann.