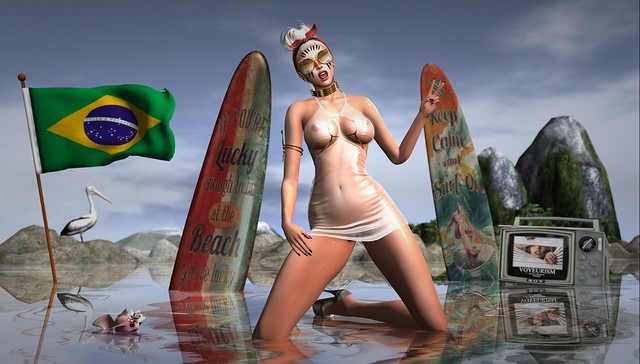 Because Alles lives in an alternative “reality” from that of her Real Life personage – of course!! 😀

DOUX – Luxy Hairstyle [UNRIGGED] … made by Dam1710 Resident.
I am wearing this cute updo with a headscarf in a tone from the Blondes pack. Purchased at the Good Vibes Fair, which finished its recent run on June 29th. NEW.

Baiastice_1970-Sunglasses Golden … made by Sissy Pessoa.

JamBee > Clothes > PVC cutout dress > Maitreya Lara … made by JambeeSHOP Resident. I purchased the PVC dress at the brand new Mermaid Cove event, which is open from July 23rd through until August 13th. NEW.
Mermaid Cove

The pose that I have used is Summer fun 4 … made by Clarisa Congrejo. However I did alter this pose by using my Animare HUD, as I moved my head a bit and then brought my right arm down to my side.