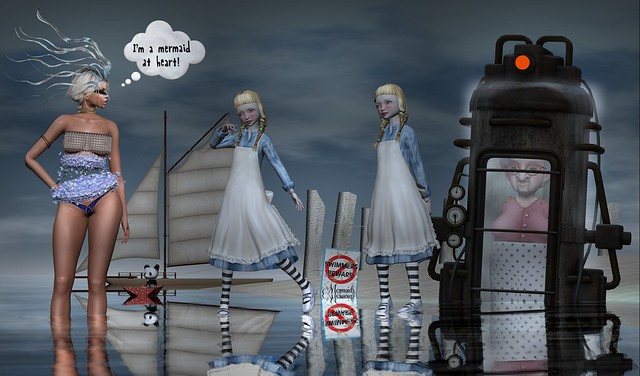 Or should I count the panda as well?

[Glam Affair] Chenoa Applier [ Catwa ] 007 ( 6 ) … made by aida Ewing.
This is a common item on the Glam Affair gacha at the latest round of The Epiphany, which is open from July 15th through until August 12th. NEW.
The Epiphany
OR
The Epiphany Mirror SIM

no. 7 METALLIQUE b/w diamonds bra … made by Shortcake Sugarplum.

r2 A/D/E enjyu panties1[navy]Maitreya … made by rei2 Aya.
r2 A/D/E enjyu panties2[navy]Maitreya … made by rei2 Aya.
The Enjyu outfit – which also includes a top, a skirt and a pair of boots that I’m not wearing – is available now at the current round of Collabor88, which is open from July 8th through until August 6th. NEW.
Collabor88

*DC*_DisplayModel_Dorothy … made by cocoro Lemon.

BackBone CryoPod … made by Ruvio Cortes. This was purchased on Second Life MarketPlace on July 15th, 2018. And you can get it there for just 399 lindens.
BackBone CryoPod

The pose that Alles used is SEmodeling-199 … made by Marie Sims, while the pose that Wren used is Bauhaus Movement – TheOut/-.Worldimension 06 … made by LouLou Teichmann.