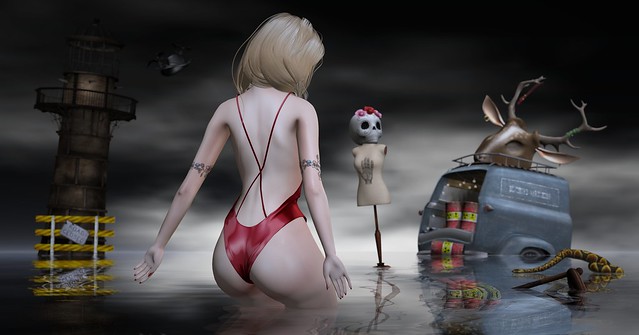 Because there are barrels of radioactive waste in the back of the abandoned van and a big snake in the foreground!! It’s just not my day, is it? 😦

{vespertine} abandoned nautilus lighthouse … made by Amelie Knelstrom.
Originally purchased in September 2014 at the Uber event, this neat item can now be bought on Second Life MarketPlace at a discounted rate.
{vespertine}nautilus abandoned lighthouse -50% off permanent sale

*LODE* Headwear – Black Pitch with feathers [black] … made by Chirzaka Vlodovic. Not worn but instead it was rezzed by me so that I could use it as a spooky prop.

The pose that I have used is :LW: Poses – Let me love you – female pose 1, mirror … made by LuaneMeo Resident.