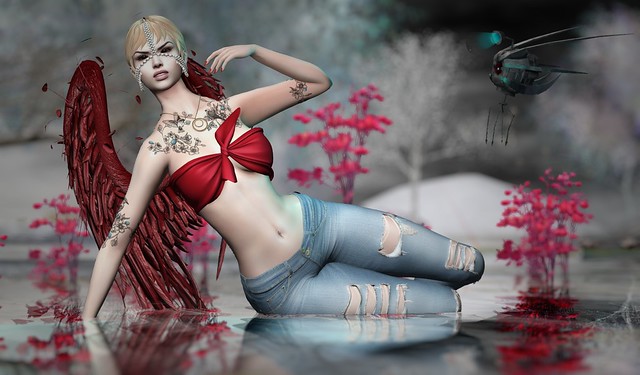 I’m just so glad that at least my robotic friend likes me so much!! 😀

But what does he think of fashion details, which you can all read about below?

AZOURY – Patience jewelry White {Copy with Resize} … made by Aniki Seetan.
This AZOURY item is available now at the latest round of the Cosmopolitan Event, which is open from May 21st through until June 2nd. NEW.
Cosmopolitan Event

[Avenge] Universe necklace (short) … made by AvengeStore Resident.
Purchased at the current 3rd Anniversary round of the Très Chic event, which is open from May 17th through until June 10th. NEW.
Très Chic

Giz Seorn – Dulcie Hanky Top [Red] Maitreya Lara … made by Giz Seorn.
The Dulcie top is available now at the latest round of the Cosmopolitan Event, which is open from May 21st through until June 2nd. NEW.
Cosmopolitan Event

The pink flowers that are on the scene belong to the SIM (Grace of Hope) and are called Cerise beauty’s – 2 prim … made by Serious Teatime.