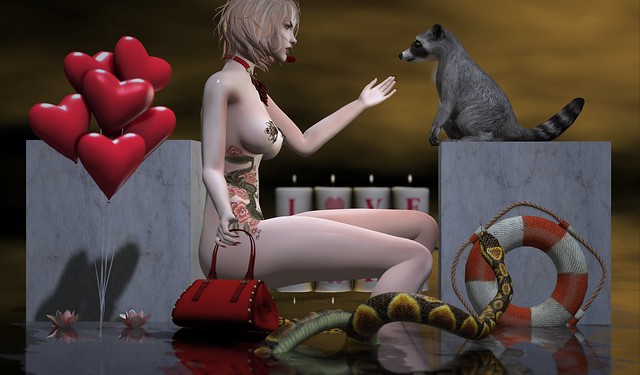 Well, he is rather cute when he poses like this in a picture!! 😀

As for my worn details and other trivia, please read on below.

tram H0414 hair(Non Rigged) … made by moca Loup. I am wearing this wild and windblown hair in a tone from the HUD-B pack. Purchased at the current round of Uber, which is open from April 25th until May 22nd. NEW.
Uber

Baiastice_Chris leather handbag-red … made by Baiastice Resident. I am holding this in my right hand.

{what next} LOVE Candles Decor … made by Winter Thorn.

{what next} Sweetheart Balloons Decor

Mutresse-Cheeky Raccoons-Gasping … made by Eeky Cioc.
The Cheeky Raccoons along with numerous other gacha items produced by Mutresse over the past few years are still available at their inworld store.
Mutresse – Gacha Machines