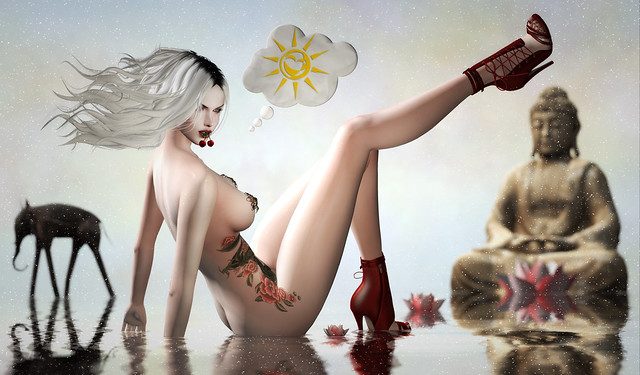 And in case you didn’t know, Nelumbo is a genus of aquatic plants with large, showy flowers. And members of this genus are commonly called lotus!! 😀

As for her fashion details, this is how Alles is kitted out from head to toe.

Tableau Vivant \\ Vento … made by M4ri1yn Magic. I am wearing this wind-blown hair in a tone from the Black+White pack. Available now at the current round of Uber, which is open from April 25th until May 22nd. NEW.
Uber

Giz Seorn – Nikki Heels *MATERIAL* [FATPACK] Maitreya … made by Giz Seorn.
Available now at the current round of the Cosmopolitan Event, which is open from April 23rd through until May 5th. NEW.
Cosmopolitan Event

JOMO Buddha statue B … made by xiaoduo Abbot. This Buddha is available in five different textures and is modifiable so that you can either increase or decrease the size. Purchased on Second Life MarketPlace in April 2018:
JOMO Buddha statue

The pose that I have used is ground 02 … made by Weronika Pobieski. This pose is one of eight in a Frozen – Sensual Ground Poses set, however these poses have all been loaded into a pose stand by me which was then tilted at ninety degrees so that I sat with one leg on the “ground” rather than have both legs high in the air.
Available on Second Life MarketPlace here:
Frozen – Sensual Ground Poses