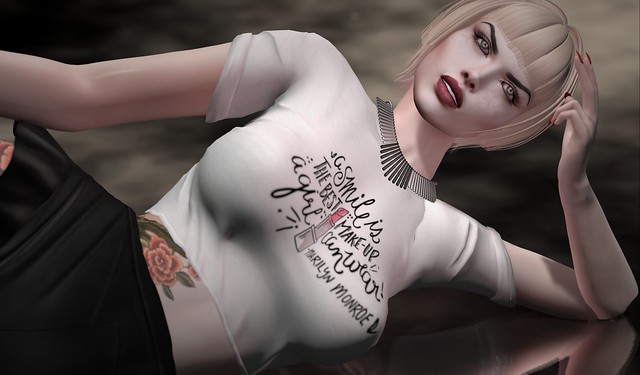 Which is what dear Marilyn was trying to imply … I think!! 😀

As for my worn details, this is how Alles is kitted out at Luanes World.

.:E.A.Studio:.Necklaces Malea … made by Shina Shan.
Purchased as part of the .:E.A.Studio:.BOX Parure Malea in April 2018.

Giz Seorn – Cropped T-shirt [FATPACK] Lara … made by Giz Seorn.
The Cropped T-shirt is available in twenty different options (I am wearing one of them), with added content available if you purchase the Fatpack. On sale now at the latest round of Uber, which is open from April 25th through until May 22nd. NEW.
Uber
OR
Uber Cam Shopping Sim

GIZ SEORN – Frilly Hotpants [FATPACK] Maitreya Lara … made by Giz Seorn.
The Frilly Hotpants are available in ten different colours at the latest round of Uber, which is open from April 25th through until May 22nd. NEW.
Uber
OR
Uber Cam Shopping Sim

The pose that I have used is Bauhaus Movement – Cleo … made by LouLou Teichmann. However I slightly altered this pose by using my Animare HUD.