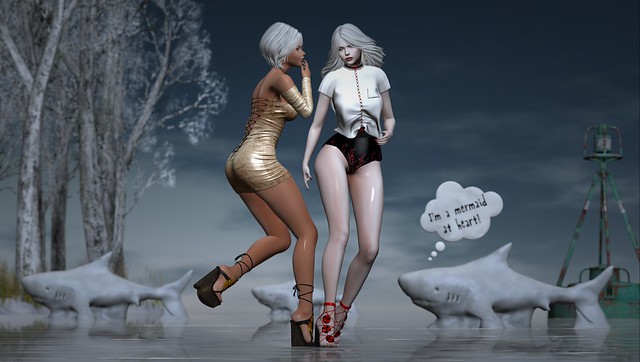 Cos we are far better looking than them great white sharks!! 😀

As for our styling notes, please read on below.

JASMINE – on the left – is wearing the following:

Blueberry – Foxy – Back Tied Dress – Gold Pack … made by Blueberryxx Resident. Purchased at the Blueberry Mainstore in April 2018, cos Blueberry are having a massive 50% off sale from April 13th until April 20th – it’s their sixth birthday.
Blueberry Mainstore

Pure Poison – Sunflower Platforms – Maitreya … made by Shaleene Kenin. Purchased at at the current round of Collabor88, which is open from April 8th through until May 6th. NEW.
Collabor88

MINA Hair – Celeste … made by Mina Nakamura. I am wearing this in a tone from the Blacks & Greys pack. Celeste is available as an exclusive item at the MINA mainstore during the inaugural round of FaMESHed Go that began on April 15th. NEW.
MINA Hair Mainstore
For more information about FaMESHED Go, click here: http://fameshedgo.com/